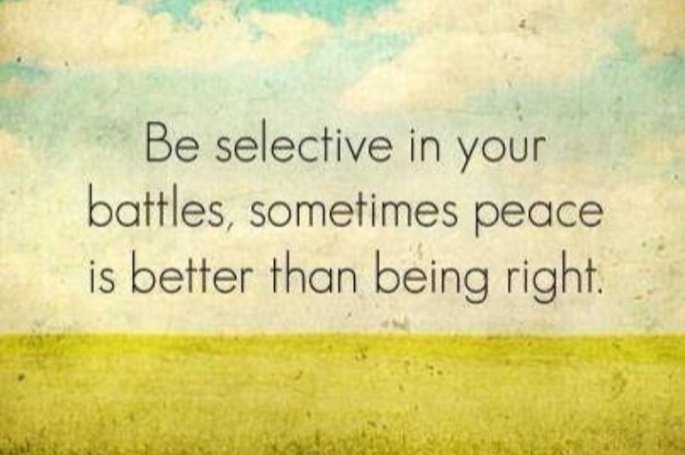 “BE SELECTIVE WITH YOUR BATTLES, SOMETIMES PEACE IS BETTER THAN BEING RIGHT. “

We are not satisfied to be right, unless we can prove others to be wrong. We humans believe in rationalizing that we are RIGHT. It is thoroughly ineffective if we don’t prove that the person in front of us is wrong.

The obstinacy of human nature presents itself as being right and this sense of being right is not confirmed until and unless one does not demonstrate that one’s opponent is wrong. It contributes negative energy and spoils a relationship. But have we ever noticed how much have we lost in this argument of domination, we have proved ourselves “right”….that’s fine, perfectly a win-win situation but what damage we have done is beyond repair.

Firstly, when we argue with somebody we are definitely not at peace. Our mind works at it’s highest pace to bring out arguments that are in favour of your statement….Scientifically speaking I don’t know the speed of our thoughts gushing in and out. I can imagine, it is like an overstuffed cafetaria where the order of the customer has to be served with the best satisfaction of the customers. Poor brain!!!🤯….😄😄😄

Secondly, your image gets ruined believe it or not, it is true. See from the other side of the coin. People start avoiding you, nobody likes a bossy behaviour. So my dear friends, “sometimes peace is better than being right”.

Peace is a big entity. Dropping your arms before anybody does not mean you have lost, you have accepted the situation instead you don’t want more ugly situations, you want things to move smoothly. Proving yourself right doesn’t mean you have won a situation. It happens seldomly but in a broader sense it creates negativism, stress, lack of satisfaction and unhappiness.

So stay positive! Stay at peace!!😌😇